Kris Smaldon’s passion as a health assistant was to help kids in hospital and their families cope with difficulties resulting from a medical diagnoses. She thought she’d heard of every ailment a child could possibly suffer from.

Until her own daughter was diagnosed with Celiac disease. With what?

Shock, disbelief, powerless was how she felt hearing four year old Skylar had it, confirmed by blood test.  Pale with dark circles under her eyes, she’d suffered brain fog, fatigue, bloated-belly for years. “I did a search on the internet and panicked when I read what Celiac was’, Kris, now 45 remembers. “My first trip to the grocery store, I cried. I didn’t even know what gluten was. I was completely overwhelmed and couldn’t figure out what was safe because of the way food is labeled.”

It’s a lot to handle as a young mum with three girls; Skylar was four and a half. Sisters, McKenzie was two and Addison just a few months old. Over the next few years, each of them would be confirmed celiac. The youngest by two and a half years, brother Jack, also has the gene but not the disease.

Luckily and unusually, there was local help too. On Long Island, NY, where the Smaldon family lived, there was a support group called Raising Our Celiac Kids, (R.O.C.K.).  There Kris learned from others in the same boat. “Using normal cookbooks, but subbing out wheat flour for gluten-free flour one-for-one was a great help early on”, muses Kristin, “But I wasn’t great in the kitchen, so I had to learn”.

Kris was soon driving forty minutes to the only store around that stocked gluten-free-anything, and most of those ingredients weren’t great. Except Kinnikiritter Animal Cookies, the first kid-friendly option she could find that was both safe and scrumptious.

“The whole family went gluten-free so the girls would feel safe at home”, explains Kristin. As the girls grew, so did the choices. Kinnikinnick cookies and donuts were always asked for, but S’moreables® Graham Crackers were the top favourite. Particularly because Skylar’s first year at elementary school meant Kris had to buy enough S'moreables® -- 100 boxes -- for her whole class to make gingerbread houses so Skylar could join in the fun and stay safe. The alternative would have been sitting all alone and building her own.  Belonging and feeling normal at school is one of the most important things parents want their kids to know.

The 504 plan has led to measures like getting a dedicated gluten-free microwave for the girls at school. Small but meaningful steps so they so they can enjoy a hot meal like their peers without getting “glutened’.

Kris’s Instagram account and blog have become a pantry of great gluten-free recipes and tips to make life with celiac feel as normal as possible. Ideas like getting a second small freezer at home for pizza and cupcakes on baking days to take later to birthday parties so the girls don’t have to go without.

“Educating others is so important,” Kristen muses, “You’ve got to encourage those who want to learn. One of Skylar’s friends is so supportive, they even have a dedicated set of pots and pans for her when she visits so they can eat together and even bake with her friends”.

When one is never enough. Our most popular cookie--marshmallow and chocolate’s best friend. VEGAN.

So mmmoist, so hearty, so tangy, so grateful. Real blueberries. Vitamin & mineral enriched. 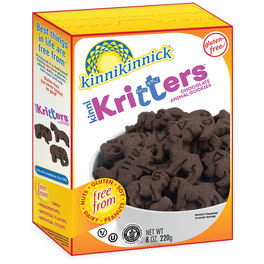 Most kids love chocolate, most love animals. Together they’re a winning team for playing imaginary games and satisfying snacks. VEGAN.